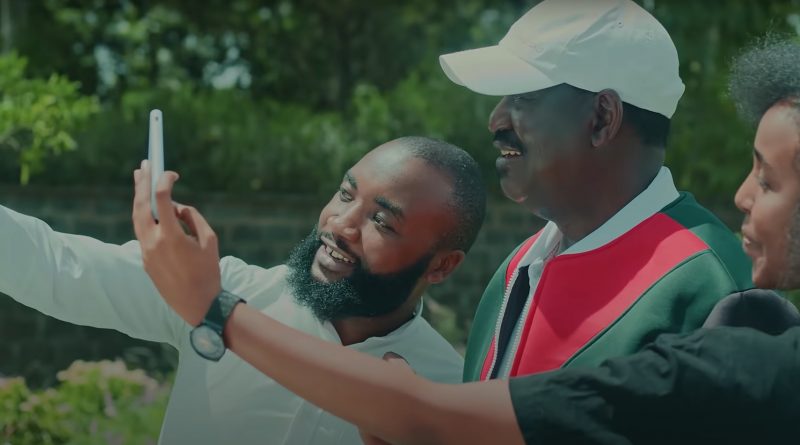 Welcome to Kenya where comedians and politicians are becoming musicians. This started with Awinja who released a valentine song. Cartoon the comedian followed releasing a song titled Kamkora. Raila a.k.a Baba was not left out. Kindly keep it here as we discuss more about Baba and Emmanuel Musindi Lelo Ni Lelo remix

Raila Odinga, aka ‘Baba’ featuring singer Emmanuel Musindi were set to release their first song together titled ‘Lelo ni lelo’ on valentine’s day. This had been announced by Odinga’s team but later postponed to Tuesday, 15th February.

We don’t have much for now concerning Emmanuel Musindi Biography. Emmanuel Musindi is an artist based in Nairobi but hails from Kakamega. He had done the song in 2015 and decided to do a remix of the same with Raila Odinga for his political campaigns.

It is a three minutes and 18seconds video, whereby Raila Odinga is seen dancing alongside Emmanuel and the dancers. He showcases his skills in dancing in the video. He is seen dressed in red and a green Azimio la Umoja jacket and blue trousers while his dancers are dressed in traditional attires.

Reason for this remix by Baba and Emmanuel Musindi

This new song has been Raila’s trademark while doing his political campaigns and rallies. He dropped the music to show his willingness and determination to win in the August 9 elections.

He wrote on Twitter to announce the premiere of the music video. “set your reminders for the premiere of my first music video ever”, he wrote leaving links on his Facebook and Twitter accounts. Many youtube accounts have uploaded this talk and the song is receiving massive viewership.

Baba and Emmanuel Musindi Lelo Ni Lelo remix has been received well by leaders from the Azimio la Umoja team.  The leaders include Gladys Wanga, Alinur Mohammed among others.

Mohammed Alinur even went ahead to write on Twitter on how Baba has proven to the world that he is talented as well as being a leader.

There you go, You can now enjoy this song both the video and audio through our attached link provided below. Kindly let us know how you feel about this song. Keep it here for more updates