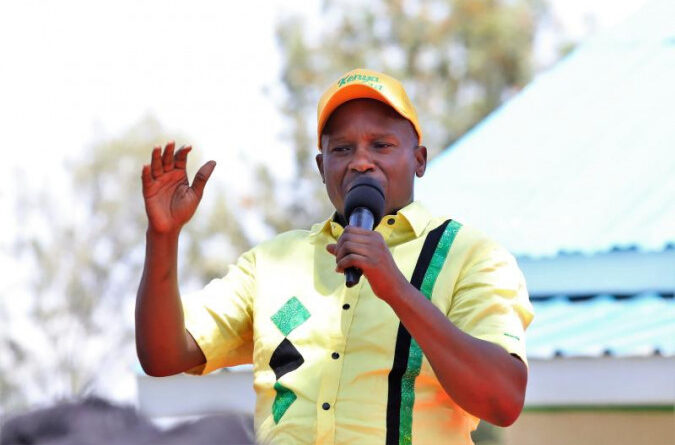 Kindiki was furious when Rigathi was named as Ruto’s running mate, and he even proclaimed that he would leave politics till further notice. He changed his mind a few days later and agreed to back William Ruto and Rigathi Gacagua. More about Kithure Kindiki’s biography, education, wife, and career can be found here.

For those who are curious about Kithure Kindiki, he is a trained lawyer who has represented William Ruto in the Hague. Kithure who had the aim of becoming the next deputy president has acted as a lawyer for a number of politicians, winning the majority of their lawsuits.

Kindiki was born on July 16, 1972, according to reports. He is a prominent Kenyan politician and lawyer. Kithure is the type of person who says little but gets everything done correctly. In the 2013 General Election, he was elected to the Kenyan Senate to represent Tharaka-Nithi County. Kindiki was re-elected to represent the same county in 2017.

Kindiki completed his secondary education at Lenana School, formerly known as the Duke of York School, before enrolling in Moi University’s Bachelor of Laws program’s inaugural class in 1994.

He was retained as a graduate assistant after an outstanding performance before receiving a scholarship to study for his Master of Laws and PhD at the University of Pretoria.

Kithure was dissatisfied, so he returned to his studies. Profesor Kithure earned a PhD in International Law from the University of Pretoria in South Africa in 2002. He has been described as the most educated senator and a well-qualified lawyer thus far.

Kindiki was first elected Senator for Tharaka-Nithi County in 2013, and he was re-elected in 2017. He was the Senate Majority Leader from 2013 to 2017, and the Kenya Senate Deputy Speaker from August 2017 to 2020. The Jubilee Party later deposed him for their known reasons

In early 2001, Prof Kithure Kindiki married Joyce, a university lecturer. Kithure Kindiki and his wife Joyce are parents to two children. Kindiki’s mother is both a housewife and a Methodist minister. She lives in the Tharaka Nithi County village of Irunduni.

I hope you have enjoyed reading about Kithure Kindiki biography, Education, wife and career. Thanks for following our site