A lot of people are now turning to be YouTubers. According to our research, You can make a lot of money using Youtube. What you need to have is a youtube channel and provide unique content. Eve Mungai is one of the successful YouTubers. She joined youtube some few years back and right now she is making a lot of cash. I understand you would like to learn more about Eve Mungai. Kindly take your seat as I take you through Mungai Eve Biography, Age, Education and Boyfriend

As I mentioned, Eve Mungai is one of the successful YouTubers who makes more than one million every month. As we speak, She is now working with Odi bet thus making more extra cash.

Most people know her as Eve Mungai but her real names are Evelyn Wanjiku Mungai. She was born in Gachiku village, Murang’a county, on April 6, 2000. Her childhood was ordinary until she was in fifth grade when her mother fell ill and died.

She needed two surgeries, and the medical expenditures were substantial. She is doing well today, and both of her parents, she reports, are quite supportive.

She enrolled in a local high school after finishing primary school. Due to budgetary constraints, she had to change schools several times. She was always a strong leader who enjoyed poetry and public speaking, despite her distaste for education.

Her father wanted her to be a teacher, but she had little interest in doing so. One of her teachers noticed her public speaking ability and felt she’d developed into a brilliant journalist. After graduating from high school, she enrolled in a journalism course but dropped out after one semester. In the future, she plans to return to school.

Eve Mungai is dating her photographer, Trevor, who is also her director. They’ve been together for the previous three years. Trevor, the marketing director at Eve Mungai Media, was the one who encouraged her to start a YouTube channel.

Mungai’s quick rise in the sector has been supported by Trevor’s significant knowledge. Over the course of two years, Eve’s boyfriend informed Afrikan Traveller how he created content for a customer and grew his YouTube channel from zero to over 20,000 subscribers for free. His efforts were rewarded when his employer was able to secure sponsors, and he was paid.

Trevor alleges he was sacked by his new boss, driving him to start a YouTube channel with his girlfriend. The first video was a huge success, bringing in over 1000 new subscribers. His boss was irritated by the situation.

He advised Trevor that he needed to get rid of the film if he wanted to keep his job. Eve, who had dropped out of school and was unemployed, suggested his lover to save his money and instead focus on their channel.

To pay their rent, they had to sell one of their cameras.

After dropping out of college, she needed to find a job to support herself. On January 21, 2020, she started her YouTube channel, and her first video was released on October 31, 2020. She went on to make movies in which she asked individuals odd questions about prominent topics, and this was a video of her covering the Machakos Gengeton Festival.

In December 2020, she’ll meet with Madocho, Stupid Boy, and Liyetin, three struggling musicians. She was in charge of chronicling their story and garnering attention to the trio. As a result of the publicity, they were able to get sponsorship from Vagah of Afro Royalties.

That is all we have for now about Mungai Eve Biography, Age, Education and Boyfriend. Keep it here for more information 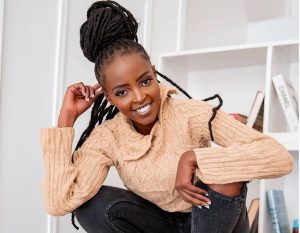 The young YouTuber has kept her net worth a secret. Her YouTube channel, on the other hand, made her a fortune. As of January 2020, the channel had over 18 million views. Mungai Eve earns an average of Ksh. 1.5 million per month on YouTube, with a low of Ksh. 700,000 on a bad month.