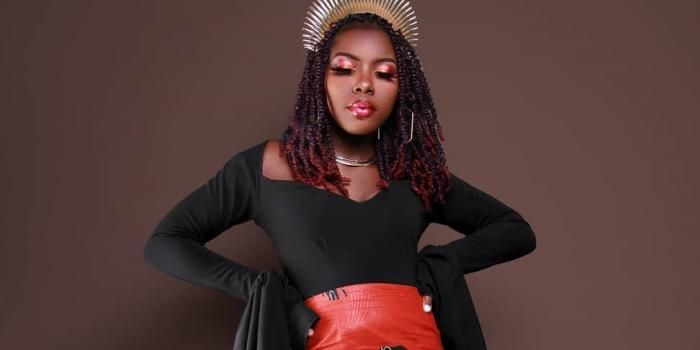 Cartoon Comedian is one of the successful comedians in Kenya. She started appearing on Churchill’s show before opening her youtube channel where she nowadays uploads her comedies. Her family life was not as simple as you may think and that is the reason why she decided to join the comedy industry. Keep it here to learn more about Cartoon Comedian Biography and his latest song Kamkora.

Cartoon comedian, whose real name is Vanessa Akinyi, was born in 2000 in Pumwani, Nairobi County. She was raised up in Kayole where she features in her art.
Cartoon comedian is Kenyan based and uses her talent in humour to entertain Kenyans. She came to the spotlight in 2020 during the covid-19 pandemic when she started doing humorous skits. The main skit that made her noticeable was the “inanisuffocate, inanichoke” content.

Cartoon comedian was born in a family of 5, and she is the only girl in her family. She does not speak much about her brothers but she speaks highly of how her parents support her art.
She is mostly acting in Kayole because that is where she grew up in.

Vanessa Akinyi aka Cartoon comedian went to school at Donholm primary school for her primary education. She is mostly described by her classmates as a funny character who always entertained them.

She joined Kiambu high school but later got transferred to Einstein secondary school where she sat for her KCSE exams.
Career

After her secondary school education, she started by hawking omenas around the Eastland area of Nairobi. Her great hilarious jokes started attracting so many people around her and some encouraged her to try her luck in comedy.

She made her great debut in comedy in the year 2020, when her funny skits went viral. Cartoon comedian is a stand-up comedian, actress and is also involved in filmmaking. She does not shy at all from making people laugh from her skits.

Her most viral skit was when she did an episode with a boyfriend who allegedly speaks too much English and she cannot understand since she is a ghetto girl. The video attracted thousands of views making cartoon comedians more famous.

She then, after coming to the limelight, did more videos being inspired by her life as a ghetto girl and the daily occurrences that happen in local towns.
Cartoon comedian later landed a role in Churchill’s show.

She always entertained the audience with hearty laughter. Cartoon comedian has learnt how to use YouTube as her main social media platform for her skits. She has gained a major following with thousands of subscribers on YouTube.

Cartoon comedian always dreamed of becoming a lawyer while growing up, and she sometimes makes fun of it in some of her skits since her career life is directed in another direction.

She says she is highly passionate about comedy and is working on improving her filmmaking journey so as to be able to make ends meet. She is usually able to relate mostly to her audience making her a great catch in the comedy industry.

However, she has been on the receiving end recently because of a skit that she did and was not well received. She did a video trying to highlight the grievances workers in the gulf usually encounter.

The video was not well received as people wrote on her comments angrily saying that she was making fun of them. This made Cartoon comedian address her followers, trying to explain that she was misinterpreted.

The video was later pulled down after a huge fight in her comments section. Cartoon comedian even went ahead to apologize saying she had put a disclaimer to only try and highlight the plight of those working for the Arabs.

She is however not the first celebrity to encounter such controversy on social media. Jimmy Gait was also on the spotlights months ago for claiming that most Kenyan ladies are usually mistreated in the Middle East due to their low morals.

She made a debut in the music industry recently with her music video titled “kamkora”, which was released on 13th February 2022. This has come after several comedians and celebrities decided to venture into the music industry.

Some of them include Jackie Vike popularly known as “Awinja” who released her first-ever music video called ‘sio lazima’. Others are Diana Bahati and Mammito Eunice. It looks like more and more of them are going to try their luck there.

Cartoon comedian’s song is doing quite well, as she proclaims herself as the queen of comedy. She also said that she is setting the pace for other musicians in the industry. Her music has taken the gengetone beats and sheng lyrics.